Toyota Hilux to enter Dakar in 2017

Toyota Hilux is usually produced as a 4x4 sub-urban vehicle that weighs around 2 tons. But the model passes through radical transformations in order to participate in Dakar Rally. The competition begins on January 2nd, 2017, and the pilots start from Paraguay, drive through Bolivia and everything ends in Buenos Aires, Argentina. 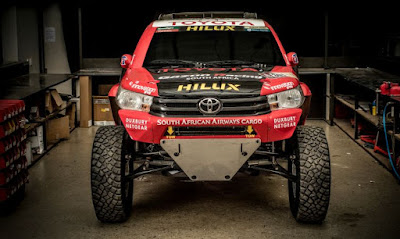 Toyota Hilux Evo is a joint development of  Toyota South Africa Motors and Toyota Gazoo Racing SA. They moved the engine and the gearbox between the axles, which turns Hilux from 4-wheel drive to rear-wheel (2-wheel) drive. By doing so, the engineers achieved better weight distribution. Another step for improving the weight distribution is mounting the heaviest compartments closer to the bottom of Hilux Evo. The power of the engine isn't mentioned, but naturally aspirated V8 with wider air restrictor (38 mm) is supposed to produce significant amount of power. And this power will drive a vehicle that weighs 1300 kg, or 615 kg less than the last competition Hilux model. Hilux Evo will be equipped with wider wheels (940 mm) and an on-board system responsible for the inflation/deflation of tires. 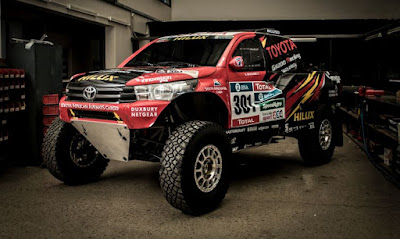 Here is what Glenn Crompton shared with us:“It’s an exciting time for us. We firmly believe in the Dakar Rally as a means to showcase our technological advances and the legendary toughness of the Toyota Hilux. The arrival of the new vehicle is the next step on this spectacular journey, and we welcome the Toyota Hilux Evo to our stable.” Mr. Grompton is Vice President of Marketing for Toyota SA Motors.

Catch us on reddit.com